Over 100 retired generals and admirals are calling for the resignations of Biden administration officials, Defense Secretary Lloyd Austin and Joint Chiefs Chairman Gen. Mark Milley, for their “negligence in performing their duties primarily involving events surrounding the disastrous withdrawal from Afghanistan.”

This week alone, the number demanding resignations jumped from 90 to 130. They detailed their plea in an open letter published by Flag Officers 4 America, which argues that the principal military advisors should have “recommended against this dangerous withdrawal in the strongest possible terms.” 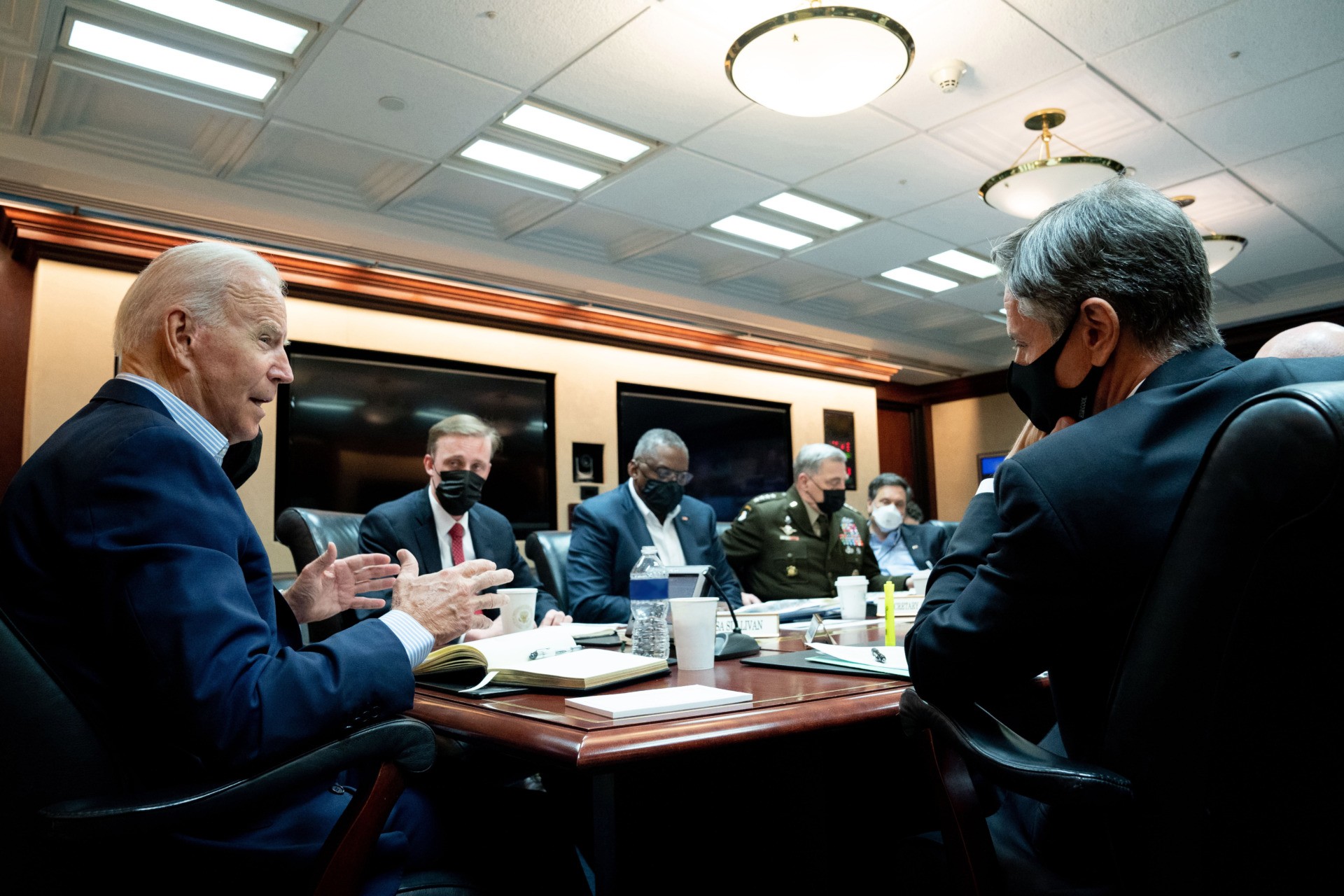 In this handout photo provided by the White House, President Joe Biden meets with his national security team for an operational update on the situation in Afghanistan on August 22, 2021 at the White House in Washington, DC. The President was joined by Secretary of State Antony Blinken (R), Secretary of Defense Lloyd Austin (3rd L), Chairman of the Joint Chiefs of Staff Gen. Mark Milley (4th L), National Security Advisor Jake Sullivan (2nd L), DNI Avril Haines, CIA Director William J. Burns, and other senior officials. (Photo by The White House via Getty Images)

The consequences of this disaster are enormous and will reverberate for decades beginning with the safety of Americans and Afghans who are unable to move safely to evacuation points; therefore, being de facto hostages of the Taliban at this time. The death and torture of Afghans has already begun and will result in a human tragedy of major proportions. The loss of billions of dollars in advanced military equipment and supplies falling into the hands of our enemies is catastrophic. The damage to the reputation of the United States is indescribable. We are now seen, and will be seen for many years, as an unreliable partner in any multinational agreement or operation. Trust in the United States is irreparably damaged.

Moreover, now our adversaries are emboldened to move against America due to the weakness displayed in Afghanistan. China benefits the most followed by Russia, Pakistan, Iran, North Korea and others. Terrorists around the world are emboldened and able to pass freely into our country through our open border with Mexico.

Besides these military operational reasons for resignations, there are leadership, training, and morale reasons for resignations. In interviews, congressional testimony, and public statements it has become clear that top leaders in our military are placing mandatory emphasis on PC “wokeness” related training which is extremely divisive and harmful to unit cohesion, readiness, and war fighting capability. Our military exists to fight and win our Nation’s wars and that must be the sole focus of our top military leaders.

“For these reasons we call on the SECDEF Austin and the CJCS General Milley to resign,” the letter added, citing the military’s fundamental principle of “holding those in charge responsible and accountable for their actions or inactions.”

“There must be accountability at all levels for this tragic and avoidable debacle,” the letter concluded.

Calling on the leader of the free world to resign his office immediately weighs heavy on my heart, but this must happen to restore American’s safety both at home & abroad, our honor, & faith in the Chief Executive to faithfully execute the duties of the Presidency.

A Rasmussen Reports survey released Wednesday found a majority of American voters expressing the belief that Biden should resign over his administration’s botched withdrawal from Afghanistan.