Local NBC affiliate WGRZ reported: “With 97 percent of the precincts reporting Tuesday night, write-in candidates have nearly 33,900 votes, or 59 percent. The results do not say who received those write-in votes, but Brown has waged an aggressive write-in campaign since he lost the Democratic Party primary back in June.”

Brown called his apparent victory, which would see him govern for a fifth term, “one of the greatest comeback stories in our history.”

In June, the Associated Press reported that Walton was “on track” to become the city’s next mayor — as well as the first socialist mayor and the first female mayor.

That did not sit well with traditional Democrats, some of whom were stunned into action by the primary. 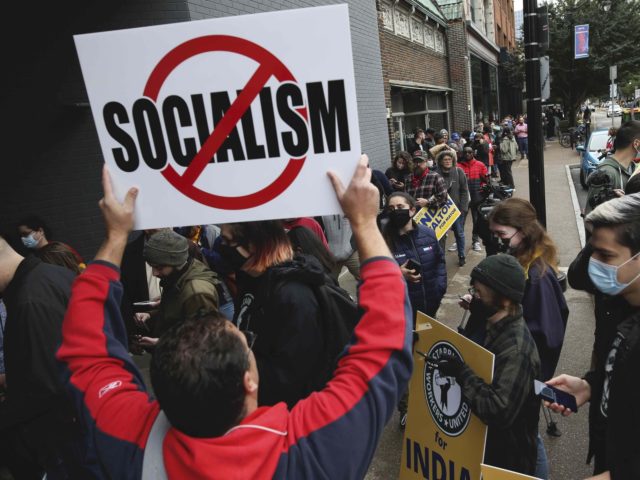 A protester holds a sign as people line up to enter a rally for Buffalo mayoral candidate India Walton on Saturday, Oct. 23, 2021, in Buffalo, N.Y. Walton will face Buffalo Mayor Byron Brown, in the general election. (AP Photo/Joshua Bessex)

Fellow “democratic socialist” Rep. Alexandria Ocasio-Cortez (D-NY) came to Buffalo to campaign for Walton, and warned fellow Democrats to line up behind the party’s official nominee: “Any Democrat right now that is trying to establish a precedent of not uniting behind the party’s nominee is playing a dangerous game,” she said.

But Byron mounted an ambitious effort to convince voters to “write down Byron Brown.”

The write-in campaign is a rare victory for the tactic — so rare that the last significant race in which it succeeded was in the 2010 U.S. Senate race in Alaska, when Sen. Lisa Murkowski (R-AK) used it to defeat a Tea Party-backed candidate who had won the Republican primary.