Left-wing firebrand Sen. Elizabeth Warren (D-MA) campaigned for Gov. Gavin Newsom (D) in California on Saturday, as the latter fights back a determined recall campaign that could see him replaced with the first black governor after Sep. 14.

Rather than touting Newsom’s record, Warren joined Newsom in warning the state’s Democratic voters about the horrors that a Republican governor like conservative talk radio host Larry Elder, the frontrunner among challengers, could bring.

Warren warned that replacing Newsom could put California on a path toward becoming more like Texas, where Republican political leaders have instituted a strict new abortion ban, or Florida, where the Republican governor has tried to bar school mask mandates.

“Governors matter,” Warren (D-Mass.) said at the Newsom campaign rally at Culver City High School. “Just consider this week what we’ve seen in Texas: a state legislature and Republican governor who are willing to set vigilantes loose to prey on vulnerable women who want to make their own decisions about their bodies.”

With his political survival in peril, Newsom is leaning on an anti-recall campaign that relies heavily on multimillion-dollar spending on mostly negative ads along with support from Warren and other big-name Democrats, hoping it’s enough to persuade California’s left-leaning voter majority to cast ballots in what could be a tight, low-turnout election.

Sen. Amy Klobuchar (D-MN) will campaign with Newsom in Santa Ana on Sunday, as the Newsom campaign targets women voters, exploiting a media smear campaign against Elder that has alleged that he is derogatory towards women. 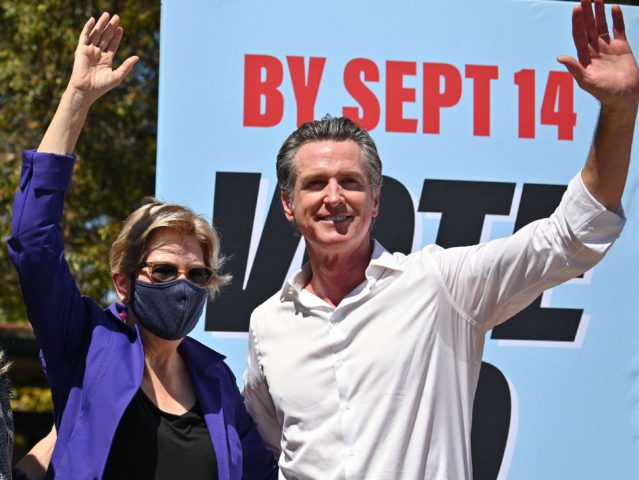 California Governor Gavin Newsom (R), Senator Elizabeth Warren (C) and Newsom’s wife Jennifer Seibel Newsom attend a rally against the upcoming gubernatorial recall election, September 4, 2021 at Culver City High School in Culver City, California. – The recall election, which will be held on September 14, 2021, asks voters to respond two questions: whether Newsom, a Democratic, should be recalled from the office of governor, and who should succeed Newsom if he is recalled. Forty-six candidates, including nine Democrats and 24 Republicans, are looking to take Newsom’s place as the governmental leader of California. (Photo by Robyn Beck / AFP) (Photo by ROBYN BECK/AFP via Getty Images)

Polls suggest that the campaign is working, with the “no” vote rising throughout the month of August, after the “yes” vote looked to be even or ahead in earlier polls. Newsom and his political backers spent $36 million in August alone, and have already raised double the amount that pro-recall forces have raised, spending heavily near Election Day, September 14.