Fort Hood Shooter Congratulates Taliban in Letter from Death Row: 'We Have Won!'

The former U.S. Army major behind the 2009 massacre at Fort Hood applauded the Taliban terrorist group’s takeover of Afghanistan in a recent letter.

From death row at Fort Leavenworth, Nidal Hasan claimed, “We Have Won” and congratulated the terrorist organization, according to the Washington Examiner, which obtained the letter.

“Hasan, who gunned down 14 people and wounded 43 more, urged the nascent terrorist government to implement its brand of brutal oppression under the guise of religion,” the outlet continued.

Breitbart News reported in August 2013 that a U.S. military panel sentenced Hasan to death following just two hours of deliberation, noting it was a unanimous decision. 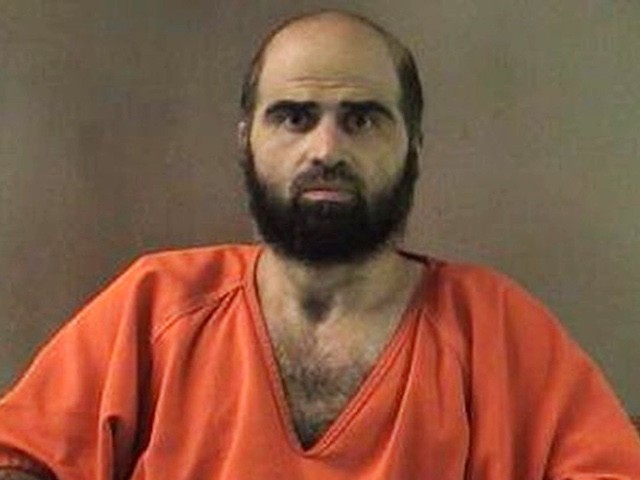 “Congratulations on your victory over those who hate for the Laws of All-Mighty God to be supreme on the land,” Hasan said in the letter from August 18. “I pray to Allah that He helps you implement Shariah Law fully, correctly, and fairly.”

“We must learn from the nations of the past and not let our wretchedness overcome us thus earning His (God’s) wrath. It is to All-mighty God we give thanks!” he concluded:

Nidal Hasan, the jihadist inspired by Al-Qaeda's Anwar al-Awlaki to murder fourteen soldiers at Fort Hood in November 2009, wrote from death row on Aug. 18 about the #Taliban–#Qaeda victory in #Afghanistan: "We Have Won" https://t.co/ZE3kxwXl9Vpic.twitter.com/qmrxioDlp0

AFP reported Thursday that 20 years after the Taliban’s regime was ousted, the Islamists had returned and were implementing their political agenda.

In regard to freedom of speech, the Taliban claimed women, including journalists, would be allowed to keep working.

“We will respect freedom of the press, because media reporting will be useful to society and will be able to help correct the leaders’ errors,” chief Taliban spokesman Zabihullah Mujahid said.

Despite his assurances, two Afghan journalists endured a severe beating and were also detained by the Taliban for covering a recent protest in Kabul, according to AFP.

“One of the Taliban put his foot on my head, crushed my face against the concrete. They kicked me in the head… I thought they were going to kill me,” photographer Nematullah Naqdi said during an interview.