The lawsuit, filed by Ohio Attorney General Dave Yost, asks a Delaware County Court to declare Google a public utility, on the grounds of its market dominance and “discriminatory and anti-competitive behavior.” As a public utility, Google would be subject to tough federal regulations on how it treats other businesses and users that depend on its services. 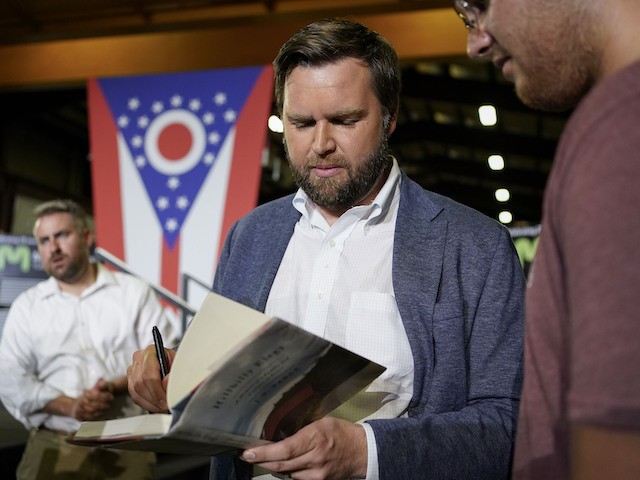 JD Vance, the venture capitalist and author of “Hillbilly Elegy”, speaks with supporters following a rally Thursday, July 1, 2021, in Middletown, Ohio, where he announced he is joining the crowded Republican race for the Ohio U.S. Senate seat being left by Rob Portman. (AP Photo/Jeff Dean)

“Google uses its dominance of internet search to steer Ohioans to Google’s own products — that’s discriminatory and anti-competitive,” Yost said in a statement announcing the lawsuit this summer.

“When you own the railroad or the electric company or the cellphone tower, you have to treat everyone the same and give everybody access.”

The lawsuit takes aim at Google’s alleged habit of prioritizing its own services, such as Google Flights, Google Maps, Google News, and YouTube in search results.

“The Claremont Institute’s goal is to protect public discourse and a robust marketplace of ideas, and therefore it has a real and substantial interest in the Attorney General’s efforts to protect Ohioan citizens’ ability to communicate and engage in meaningful democratic discourse on today’s public square – the internet,” said CCJ founder John Eastman.

“Dave Yost deserves to be applauded for this landmark lawsuit which can give Ohio the ability to provide overdue meaningful oversight of Big Technology companies like Google,” said Vance. “I’m proud to join the Claremont Institute and D.J. Swearingen in challenging Big Tech’s stranglehold on the public discourse.