Minneapolis PD Efforts Plummet: Traffic Stops Down 85%, Suspicious Stops Down 76% in past Year

Police have been wary to serve the community of Minneapolis as crime skyrockets in the year after George Floyd’s death.

Policing efforts have dropped dramatically in Minneapolis since the death of George Floyd in May of 2020. According to a report by Reuters, traffic stops declined 85 percent this past May in comparison to May of 2020. In that time, suspicious behavior stops are down 76 percent, while routine business checks have also plummeted by 76 percent.

Though policing efforts have declined since Floyd’s death, crime has skyrocketed in the Minnesota city. Minneapolis has seen 65 murders to this point in 2021. If the rate continues at the current pace, murders in the city will reach a two-decade high. Additionally, the month of May reported 91 shootings, which nearly doubles the May shootings in 2020. Violent crimes increased in June of last year and have remained prevalent.

“There isn’t a huge appetite for aggressive police work out there, and the risk/reward, certainly, we’re there and we’re sworn to protect and serve, but you also have to protect yourself and your family,” according to newly retired Minneapolis Police Commander Scott Gerlicher. “Nobody in the job or working on the job can blame those officers for being less aggressive.” 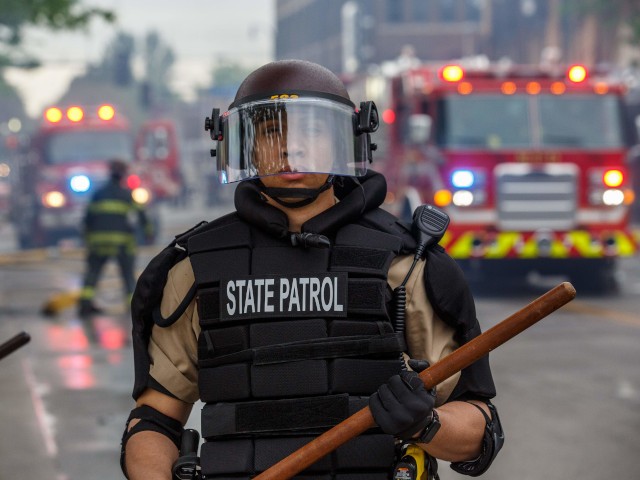 State Patrol Police officers block a road on the fourth day of protests on May 29, 2020 in Minneapolis, Minnesota. (Kerem Yucel/AFP via Getty Images)

According to law enforcement experts, proactive policing like traffic stops and suspicious behavior stops have positive and safe benefits for the community as a whole. “The evidence that proactive policing works is pretty solid,” explained University of Nebraska Omaha Criminologist Justin Nix. “If police pull back in the aggregate and they’re also pulling back in areas where crime is concentrated, that can be bad news,” Nix said.

While proactive policing leads to gun and drug busts during routine stops and interactions, Councilman Steve Fletcher explained his view that proactive policing is corrosive to community relations between police and the citizens they serve. “Having to pull over 400 people to capture a gun, that’s a lot of people feeling harassed and mistrustful of the police in our city.”

Citizens are now experiencing the consequences of a neutered police department. Mother Brandy Earthman was shocked to find 10-11 bullet holes in her house upon coming home from an aunt’s birthday dinner. Her children had been playing when bullets came flying through the door. Earthman’s 19-year-old son was shot in the arm and her three-year-old vomited from the terrifying gunshots. Earthman explained that she is making efforts to move as far away from Minneapolis as possible.

Six-year-old Aniya Allen was shot in the head while eating McDonald’s in her parent’s car and succumbed to her injury shortly thereafter. After learning of the death, a man named Marcus Smith reconsidered his anti-police rhetoric and support of protestors. He now wears a kevlar vest and patrols the very corner where Aniya died. Smith explained that “It’s now safe to carry your firearms legally, illegally. You can do that in Minneapolis. It’s a gangster’s paradise.”

NEW: Aniya Allen, the 6-year-old girl shot in the head Monday amid surging gunfire in Minneapolis, has died, her grandfather said in a social media post. https://t.co/UfKU03tG6Npic.twitter.com/Hn7wlgn1Cp

Another young child, 10-year-old Ladavionne Garret Jr was napping in his family’s car when he was shot in the head in broad daylight on April 30. Garret Jr has spent the last four months in a hospital and just recently began taking breaths on his own.  His grandmother Sharrie Jennings remarked, “this is every day, there’s shooting, there’s drug dealing. I’ve never been immune to the gun violence, but it was men on men, and now it’s kids and women. These are our future doctors, lawyers, mayors, and they’re not getting a chance at life.”

Jennings continued, “this happened at 2 o’clock in the afternoon. There were other kids out there. It could have been way more tragic than it was. And this is just every day in Minnesota streets, in Minneapolis streets, and the police just ride by like it’s OK.”

The constituents of Minneapolis face a ballot question in November that would eliminate the police department in favor of a Department of Public Safety. On September 7, Judge Jamie Anderson of the Hennepin County District ruled that the language on the ballot was, ‘vague ambiguous and incapable of implementation.” 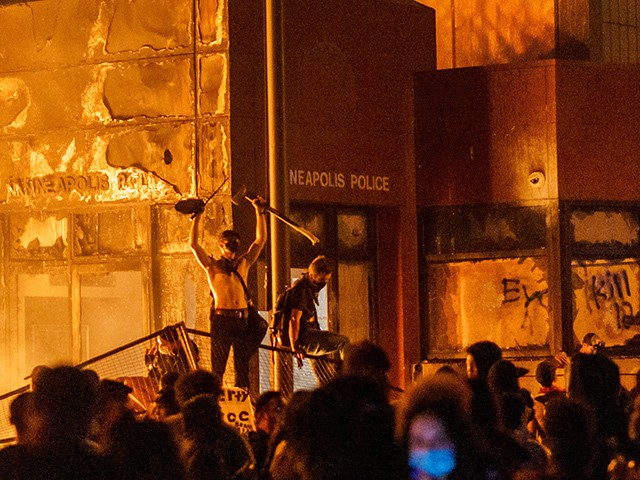 Flames from a nearby fire illuminate protesters standing on a barricade in front of the Third Police Precinct on May 28, 2020, in Minneapolis, Minnesota, during a protest over the death of George Floyd. (Kerem Yucel/AFP via Getty Images)

City Council members amended their wording mere hours before the ballots were to begin printing for the November 2 vote. Attorneys for petitioner Don Samuels, who previously served as a City Council member, have raised similar concerns with the council’s new wording. The attorneys requested an emergency hearing of Judge Anderson. “The new ballot language is designed to evade the court’s order and injunction, will mislead and confuse voters, and must not be included on the November 2, 2021, general election ballot,” wrote the attorneys.