NEWBERRY, Florida — Rep. Kat Cammack (R-FL) on Monday made it clear to Floridians that she is saying “hell no” to President Biden’s “unconstitutional” vaccine mandates.

Cammack spoke at Gov. Ron DeSantis’s (R-FL) press conference in central Florida on Monday and assured the crowd that she will stand up for their right to choose to get the coronavirus vaccine.

This issue hits “particularly close to home” for her, as her husband is a first responder and the mandates are now affecting them — those who rushed to the scene to treat people throughout the pandemic, putting everything on the line for others.

“But now some small-minded people, with even smaller hearts, want to tear us apart. They want to tell us that we are not good enough to serve the very community that we have laid so much on the line for. And to that, I say hell no,” Cammack said.

While she said she is used to dealing with government overreaching, she has “absolutely had enough.” 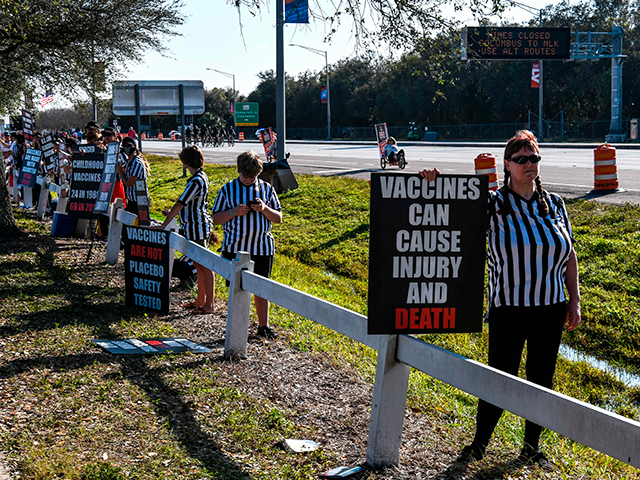 People protest against the covid-19 vaccine outside of the Raymond James Stadium prior to the Super Bowl match between Kansas City Chiefs and Tampa Bay Buccaneers in Tampa, Florida on February 7, 2021. (Photo by CHANDAN KHANNA/AFP via Getty Images)

“This isn’t anti-vaccine. We stand here today as anti-mandate,” she said, briefly walking through President Biden’s past of constantly changing positions, as he first suggested he would not mandate vaccines.

“Here in our own north-central Florida, our first responders and city employees are being forced to take the vaccine or forced out of their jobs. Well, that’s B.S.,” she declared, lamenting that too many are being forced to make a decision that is a “loss either way.”

“I don’t know about you, but I don’t know where in the Constitution the government’s powers over one’s personal health decisions can be found. Maybe that’s because there is no such power,” the Florida Republican said.

“Government has zero authority to mandate a vaccine for you,” she said, citing the availability of vaccines for those who want them.

“But if you don’t want the vaccine … we are going to fight for your right to make your own decisions,” she vowed, promising to use her power as a member of Congress to ensure that any locality that infringes on an individual’s personal medical choices will no longer receive federal funding. That garnered mass applause.